Graphic Art and the Slaughterhouse

Even before the wide-spread adoption of “ag-gag” laws banning the filming of animal cruelty in farms without the owner’s consent, British-born artist Sue Coe has used her considerable drawing and illustrating skills to capture deeply moving scenes of the indignities to which many an animal is subjected to on its journey to our collective dinner plates. By sharing her scathing criticism of factory farming and inhumane slaughterhouse practices through the medium of illustrated books and graphic (non-fiction novels), Coe and her narrative collaborators succeed in evoking childhood as a time of innocence where cuddly, anthropomorphic animals loomed large in our collective imagination.

The contrast she elicits between our adult experience which is jaded to the pain of our non-human companions and the innocence of childhood as a time of deeply engrained empathy with our animal spirit guides is not new. William Blake himself enshrined this tension in his brilliant illuminated collection, Songs of Innocence and of Experience. And, it is directly with Blake that Coe’s images demand comparison, though I fear the text that accompanies them pales in comparison with the Romantic bard’s verse.

Whereas Blake’s visual imagery complements and magnifies the achievements of his texts, Coe achieves a coherent visual narrative that almost dispenses with the need for annotation or explanation in its ability to convey a swift and visceral condemnation of the wanton cruelty and disregard built into an industry increasingly mechanized and unfeeling: the modern food system, with its factory farming and assembly line slaughter.

As an introduction to those unfamiliar with Coe’s work, I would like to suggest the following pairing. The magic of the images is such that its composition fascinates even as its content repels. It appeals to both adults and children, a fact I discovered when my 9 year old son sat mesmerized trying to make sense of the spectacle before him rather than fleeing in terror. 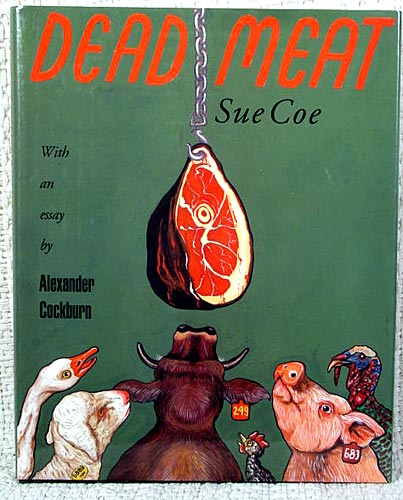 The first of these is, Dead Meat (1996), which I would describe as a graphic (non-fiction) novel. The reason I assign this genre to it because it chronicles the sights she saw when she toured slaughterhouses and witnessed various species as they waited to be dispatched to the hereafter. Because she had with her only a sketchbook, rather than a camera, her presence was not deemed as dangerous or damaging to the company’s reputation. Thus, we the readers benefit from seeing the results of what factory owners, through their lack of art or visual cultural capital, dismissed as childish or insubstantial.

The framing essay by Alexander Cockburn provides some helpful context to readers unfamiliar with Coe’s biography or her previous work. But it is through the artist’s powerful images, and the direct and unaffected prose through which she chronicles her interviews with workers on the killing floor, owners, and farmers that readers realize the mounting drama of a deeply dysfunctional food system that continues to supply our protein staples without much intervention to correct the wrongs upon which this work sheds light.

The second volume I would like to recommend, Sheep of Fools, moves outside of the American context of her earlier work and instead showcases how the global food system facilitates an even greater, because lesser known, universe of pain and suffering by introducing the concept of oceanic travel as an intermediate step between the farm, the feeding lot, and the slaughterhouse. 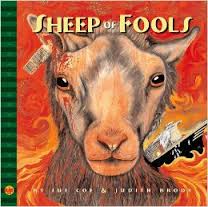 This time, the volume is much slimmer, but its visual impact remains undiluted. The book addresses the traffic in live sheep from Australia to the Middle East for slaughter according to the principles of halal butchering. What’s most impressive in this volume is how little shame it actually casts upon the religious principles which brought about this inhumane industry. Coe is at pains to contextualize this objectionable butchering practices among others that characterized the England of old as well as certain elements of the industrialized food system. Yet the title of the volume, with its obvious pun, draws attention to this uniquely cruel form of gaining access to fresh meat.

The least successful aspect of this volume is its slavish dedication to verse as its chosen medium of textual communication. Song cycles don’t usually take place on the page and for good reason. The musical accompaniment can elevate merely mundane observations to the reign of the sublime. That kind of lifting is missing here and sorely needed.

While the fiery red palette and the somewhat childish faces of the humans who are depicted in this picture book fiercely convey Coe’s condemnation of these practices, the various songs and poems that accompany them hit a false note. They fall flat and alienate the viewer from the visual drama on the page. But, this is indeed a volume worth checking out for the pictures. After all, not everything that can be said on this topic needs to be limited to mere words.

Comments Off on Graphic Art and the Slaughterhouse